You want the nation’s borders to be safe. You want the economy to continue to flourish. You want a president who understands the importance of standing with Israel and who isn’t afraid to be bold.

The Problem We Face in the Upcoming Year | Opposing Voices

The problem is that some are against President Trump and his action plan to secure our nation economically, militarily, and politically. Those voices are coming against yours in this crucial election year.

The views and voices that come against yours are more than unsettling. They are irrational. They don’t understand that their position actually disrupts the economy and safety of the United States—for both the short and long term.

You’ve trusted and honored a president who has been bold and has gotten things done in Washington D.C. in a matter of a few years. He can’t lose support or momentum now… he’s just getting started.

At My Olive Tree, we understand the unsettling feelings that anti-Trump and anti-Israel voices stir up in our nation.

As an organization that has met with Israeli officials to discover ways to bolster their economy and strengthen the relationship between the United States and Israel, we have seen firsthand how people like you have become heroes to Israel’s military and farmers.

Being a hero to Israel’s military and farmers further strengthens an important alliance—one that Trump has helped foster during his presidency by recognizing Israel’s sovereignty over the Golan Heights.

Your olive tree will help strengthen Israel’s military and economy. Your sponsorship demonstrates your commitment to stand with Israel, just as Trump has done.

Your choice to sponsor an olive tree planted in Trump Heights—a settlement in the Golan Heights—is a way to honor Trump by supporting one of the causes he’s deemed important.

The Golan Heights area is highly sought after. Whoever controls the Golan Heights controls Israel. It is the high place that overlooks the nation and provides a strategic military vantage point to those who occupy it.

Israel captured the Golan Heights region from Syria in the Six-Day War in 1967 after her neighbors attacked.

It was short war that still impacts the area today. Syria wants the land back, but Israel understands that Syrian rule of the area places her existence in jeopardy.

To honor President Trump for his brave declaration of Israel’s sovereignty over the Golan, the nation named a Golan settlement after him—Trump Heights.

And YOU have an opportunity for your name to be planted in the same soil!

Through My Olive Tree, you can sponsor a Golan Heights mature olive tree or a sapling that is planted in a grove right in the Trump Heights area. What a way to honor the president and make your voice heard in 2020! 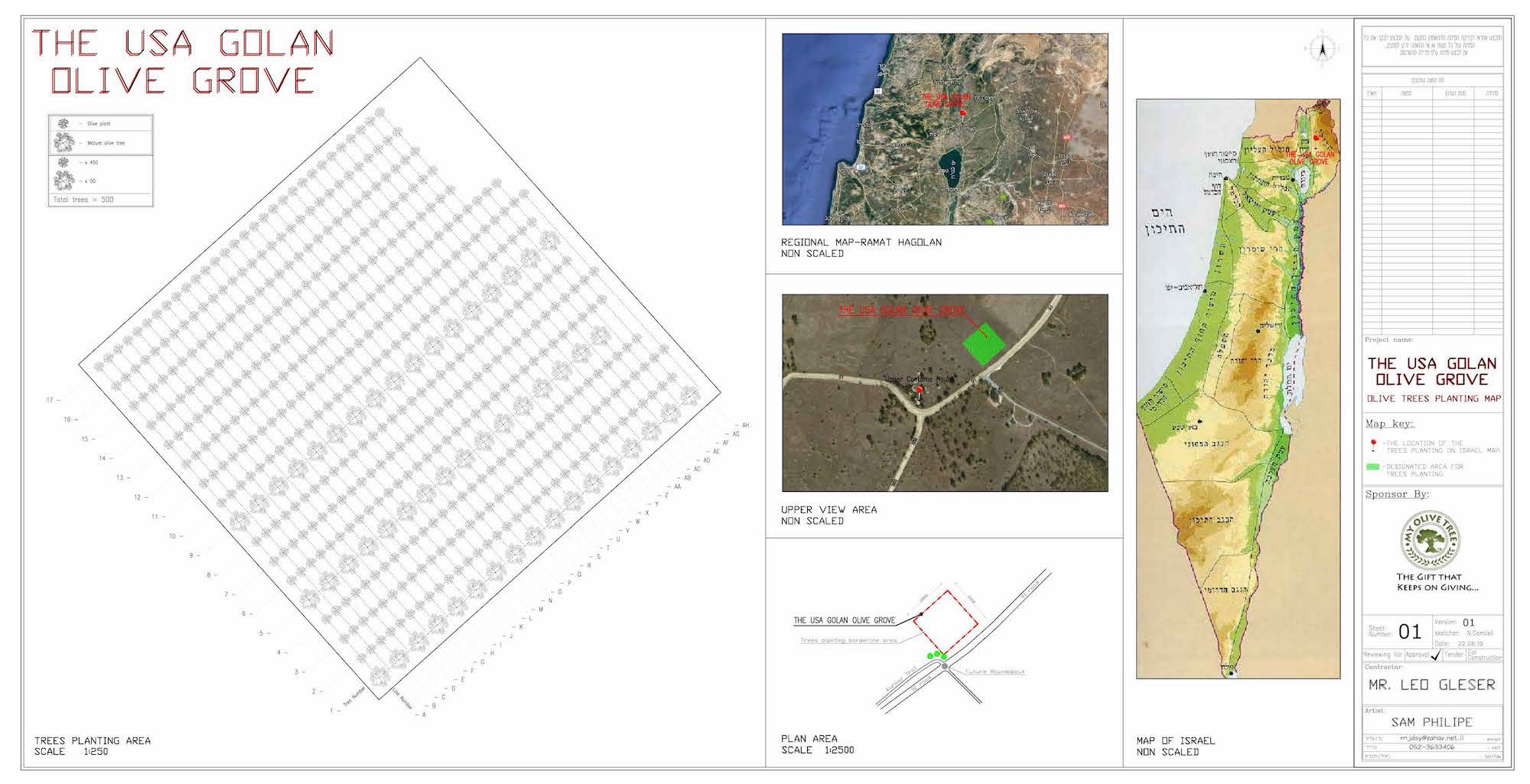 Map of My Olive Tree’s olive grove, near the Trump Heights settlement.

President Trump recognized Israel’s sovereignty over the Golan Heights in the spring of 2019—a bold move by the president that many criticized.

But Trump understood his reasoning when others did not. To bring safety to our borders, we must honor, stand with, and help Israel secure hers.

We must speak out and take action for what is right, even when tension is high.

Here’s What You Need to Do…

Due to the uniqueness of the grove and the area of the Golan, there are only 500 available sponsorships!
Sponsorship options include… 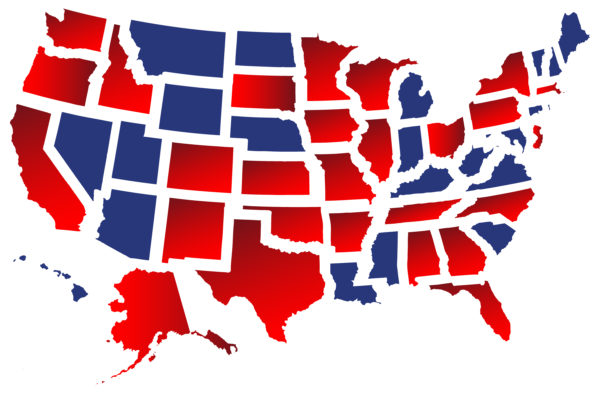 When you sponsor a mature tree, you’re turning the map red! This means that your sponsorship shows who you stand with in the 2020 election—President Donald Trump. 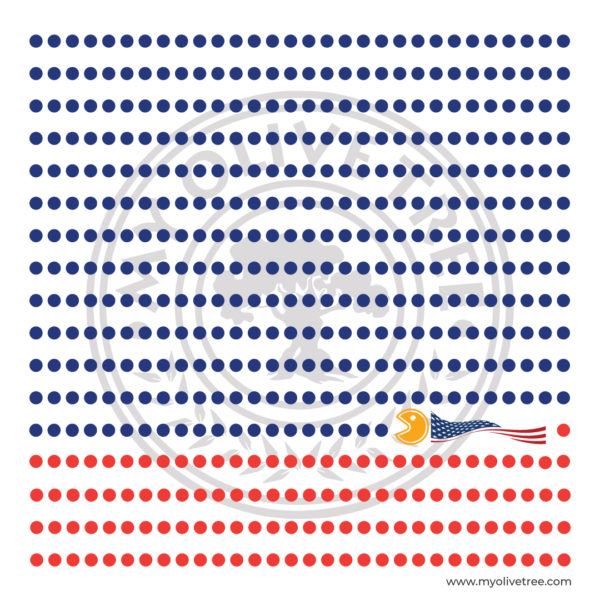 When you sponsor a sapling tree, you are 1 of 450 who can say, “I’m honoring our president and leaving a legacy that will flourish in years to come near Trump Heights!”

Your sponsorship fills the Trump Grove and establishes roots in the Promised Land that will last for hundreds of years. Each red dot represents a sponsored sapling. also changes this image from blue to red. Let’s keep the flag and our nation moving towards the top!

And they must be planted before the election!

Step 2. Honor someone who greatly influenced your life.

At checkout, you will be asked for the name of the person you’re honoring. This name, and yours, signifies solidarity with Israel, honor to your nation, love, and respect. Both your name and the name of your tributee will be displayed on our Wall of Honor.

Step 3. Honor President Trump and have your name displayed on our Wall of Honor HERE. You deserve to be recognized for boldly standing with our brave president. That is the purpose of our Wall of Honor—to honor the heroes who make things happen.

As a gift, we will send you a frameable Certificate of Authenticity that you can display in your home or office.

About the Olive Trees

Even though these sponsorships are limited, the trees give farmers in the area jobs for generations.

Plant to give your voice a visual symbol of boldness.

Plant in the soil of the Promised Land.

Let’s send a message to those who oppose President Trump that his bold actions will stand the test of time.

Don’t let fake news and anti-Trump propaganda drown out the voices that stand for what is right and just in our world. When your voice isn’t heard, the sound of freedom simply doesn’t ring quite as loud.

Click HERE to sponsor an olive tree in the Golan Heights today and let’s make 2020 a year to remember!

BONUS: Purchase a Golan Heights-Trump Grove sponsorship today and get 50% off Mike Lindell’s book, What Are the Odds? From Crack Addict to CEO.