Home / Support Israel. Invest in Israel. Be a Part of the Restoration of Israel.

Support Israel. Invest in Israel. Be a Part of the Restoration of Israel.

Being a part of God’s plan for restoring the Holy Land is a high calling that only a few will answer. It comes with an assignment of investing in and supporting Israel—both the land and the Jewish people. It is an anointed calling for those who are serious about seeking God’s heart and being in spiritual, political, and economic alignment in the end-times.

Why is Being a Part of the Restoration of Israel Such a High Calling?

Because, as His Word says, Israel is His chosen—those that He set apart for Himself, and those He has not forgotten (Deuteronomy 7:6-8).

Another Crucial Part to Understanding Your Calling to Invest in Israel…

A key feature of the restoration of Israel is that it will occur only with the supporting hands of the Gentiles.

“When I have brought them back from the peoples and gathered them out of their enemies’ lands, and I am hallowed in them in the sight of many nations, then they shall know that I am the Lord their God, who sent them into captivity among the nations, but also brought them back to their land, and left none of them captive any longer.”—Ezekiel 39:27-28 (emphasis added)

“The sons of foreigners shall build up your walls, and their kings shall minister to you; for in My wrath I struck you, but in My favor I have had mercy on you. Therefore your gates shall be open continually; they shall not be shut day or night, that men may bring to you the wealth of the Gentiles, and their kings in procession. For the nation and kingdom which will not serve you shall perish, and those nations shall be utterly ruined.”—Isaiah 60:10-12 (emphasis added)

Did you catch that?

The Gentile nations will have an active role in Israel’s restoration!

If you are reading this, the Lord is getting your attention for His restoration project. He wants to use you to support and invest in Israel.

You are on the verge of answering this call, but there is something that stands in your way.

How do you know that what you use to invest in Israel is actually being poured out into the people and the land in such a way that seeds will not only be planted but also be watered and multiplied?

Unfortunately, many times our heart wants to invest in Israel, yet when we give, our seed isn’t always planted in good soil.

This can be seen in Jesus’ parable of the sower…

“…Behold, a sower went out to sow. Some seed fell on stony places, where they did not have much earth; and they immediately sprang up because they had no depth of earth. But when the sun was up they were scorched, and because they had no root they withered away.”—Matthew 13:3-5 (emphasis added)

When we don’t plant our seed in good ground that yields a crop of thirty, sixty, or hundredfold (Matthew 13:8), we are left feeling leery of making another investment because there was no return. However, according to the parable, it was because the seed was planted in shallow soil.

When you’ve got a heart to support Israel, you need to have access to something that allows you to activate your calling and bring God’s plans from Heaven to earth. You need good soil.

God doesn’t want you to feel leery, but Satan does. If God has called you to invest in Israel, you deserve to have a way to invest that truly aligns with your heart and God’s plans of restoration.

At My Olive Tree, we want to give you a…

…way to invest in Israel that actually allows you to put roots in the Holy Land! And we know that the Holy Land is the epitome of good soil.

“…We went to the land where you sent us. It truly flows with milk and honey, and this is its fruit.”—Numbers 13:27

At My Olive Tree, we understand your leeriness. It is wise to check out any soil to ensure that it is good. This is why Curt Landry, My Olive Tree’s founder, met with former prime minister Benjamin Netanyahu years ago to discuss ways Christians could invest in Israel that would actually multiply their spiritual, political, and economic seeds to produce an abundant harvest.

Inside, you will discover how your investment…

It’s time you are given a way and a reason to invest that goes beyond “giving a fish” and really does teach them “how to fish.” What good is an investment if it is squandered away in a day? You want an investment that will last, leave a legacy, and allow you to align with God’s Kingdom restoration.

Don’t go one more day wondering how your investment in Israel truly influences and aligns a nation with God’s heart.

Through a unique partnership with the City of Jerusalem, My Olive Tree offers investment opportunities that will leave a legacy that reaps 100 fold returns. 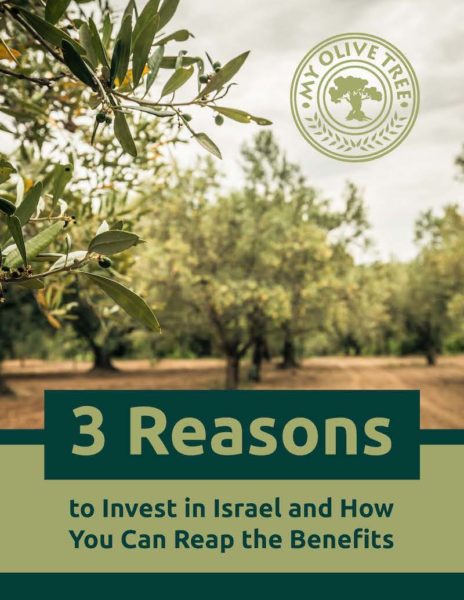 Our FREE Guide,“A Guide to Investing in Israel”, will provide you with valuable information and answer many of your questions about how to invest in a sustainable asset that will reach an exponential return. In it, we discuss topics like:

We invite you to download this FREE GUIDE to learn more about this special investment opportunity. Find out how we are providing job opportunities, encouraging sustainable agriculture, investing in Holocaust survivors and soldiers with limited resources when you click on the button below!

Fill out this form to download your FREE guide!