You are here: Home / GUIDE TO THE HISTORY OF THE KIDRON VALLEY

The Eastern Gate of the Temple Mount overlooking the Kidron Valley in the City of Jerusalem.

WHAT IS THE HISTORY OF KIDRON VALLEY?

The Kidron Valley, otherwise known as “The King’s Valley,” is beautifully nestled between two historic Holy Land locations within the City of Jerusalem. This picturesque basin is flanked on the West side by the Eastern Gate of the Temple Mount, and on the East side stands the Mount of Olives—both of which play a major role in the end-time prophecies of the Christian and Jewish faiths.

While many may be familiar with the historic significance of both the Eastern Gate and the Mount of Olives, few are as familiar with the valley that lies below. This scenic setting was once a space that entertained the ancient kings of Israel, as well as many other notable figures.

“While no physical proof currently exists, many believe that it may have been King Solomon himself who was responsible for the creation of the king’s garden (King’s Valley garden) mentioned throughout the Bible. Not only does Solomon speak of his love for gardens throughout his biblical writings, but there is also mention of the garden existing during King Hezekiah’s lifetime (2 Kings 25:4, Jeremiah 39:4, Nehemiah 3:15). Additionally, Solomon was known for crafting pools to water gardens and groves, and such an irrigation system would have been required for the King’s Valley garden to flourish.

“In the King’s Valley garden, as in many of Solomon’s gardens, would have resided the seven species—wheat, barley, grapes, pomegranates, figs, date palms, and olives—in addition to flowers such as lilies, hennas, and roses, many of which Solomon spoke of in his proverbs and songs…”

At My Olive Tree, we are working hard to restore this historic location to its original splendor.

For the first time in thousands of years, the seven species are returning to this spectacular stretch of land.

Through a unique partnership with the City of Jerusalem, the ancient King’s Valley will once again be brought to life and enjoyed by all to see. 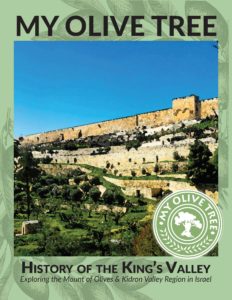 Our FREE Guide, “The History of the King’s Valley: Exploring the Mount of Olives & Kidron Valley Region in Israel” will provide you with valuable information and answer many of your questions about this historic Holy Land location. In it we discuss topics like:

We invite you to download this FREE GUIDE to learn more about this special location. Find out how we are working to make a lasting impact on the nation of Israel and the Jewish people, just by restoring the seven species of Israel to historic sites like this one.