If you were to hop in your car and go for a drive west out of Jerusalem toward Ma’ale Adumim, your eyes would rest upon the soft, rolling hills of the Judean desert. The breathtaking landscape of Ma’ale Adumim would come into view just miles outside of Jerusalem.

If you kept driving further into the city of Ma’ale Adumim, you would reach its center. At the core of the city is a roundabout full of lush green flora, beautiful shrubs, and a stand-alone copper olive tree. This peaceful garden sits in a strategic location for a specific purpose.

Keep reading to find out the miracle behind the copper olive tree!

Ma’ale Adumim is a suburban area outside of Jerusalem. It is hard to believe that this fast-growing area is still considered a settlement. A long line of homes and apartment buildings are in the process of being erected to support the increasing population.

The settlement, about 1,500 feet above sea level, links together the Jordan Valley and the Judean Desert to Jerusalem. It was established in 1975 by 23 families and looks over Jerusalem, the Mount of Olives, and the wide expanse of the Judean wilderness.

This Israeli city, decorated with Jerusalem stone, has a strong foundation in the hearts of Israelis. It has become more than just a city of 41,000. It is symbolic of the political stand in the West Bank area guarding Jerusalem from the east.

It prevents Palestinian settlements from surrounding it, yet at the same time, that stand-alone copper tree in the middle of the city’s garden roundabout says, “Our hands are for peace.”

The History of Ma’ale Adumim

In Joshua 15:6-18, Ma’ale Adumim is described as the border between the tribes of Judah and Benjamin.

Are you wondering what Ma’ale Adumim means? It is a reference to the reddish hue of the rocky route from the Jordan Valley to Jerusalem.

Read the Passage from Joshua About Ma’ale Adumim Below:

Around the time of the Yom Kippur War, settlements were created in Judea and Samaria. Ma’ale Adumim was one of those settlements. The 23 pioneering families worked hard to establish the city and the Israeli government eventually recognized it as a settlement, and it now operates as a municipality.

Those 23 pioneering families launched the movement on the night of Hanukkah in 1975—becoming a local council in 1979—and now thousands of others call Ma’ale Adumim home.

Have you ever seen a painting or a sculpture that, from a distance, appeared to be almost alive?

Take a look at this olive tree… 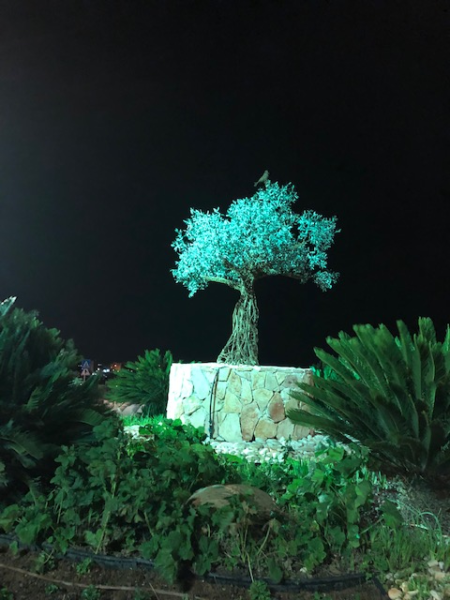 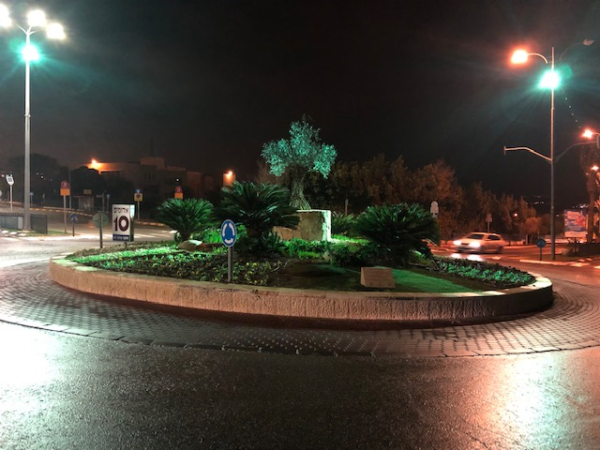 Would you believe its leaves, numbering more than 30,000, are perfectly cut and carved from iron, steel, and copper?

Each leaf, yes, all 30,000 of them, were hand cut by a group of blind students from a school in Ma’ale Adumim.

One of our representatives in Israel has been in contact with this school and is interested in discovering the students’ hidden talents. But hidden no more, their gift is being shared in one of the most significant borders in the world.

Taking the hardness of the steel, iron, and copper to a place of bending and softening to create an intricate olive leaf is more than just a craft. It is a physical reminder for us to pray for softened hearts and to stand with the nation of Israel—to see it as God envisioned. A land full of abundant inheritance and flowing with milk and honey (see Ezekiel 20:6, 37:21-23; Exodus 3:8).

This olive tree represents our mission to fulfill God’s commission—to provide hope, restore the Holy Land, and pray for peace.

This tree was presented and dedicated to My Olive Tree as a thank-you for the ongoing support that our sponsors have provided. The city is grateful that we, as the My Olive Tree community, have not backed away, but instead pushed pioneering efforts forward to provide jobs that will rebirth the land.

And we are grateful for your dedication as supporters who see the significance of the Holy Land, especially during this critical time in history. We thank you for standing firm in the faith and seeking peace beneath the branch of the olive tree.