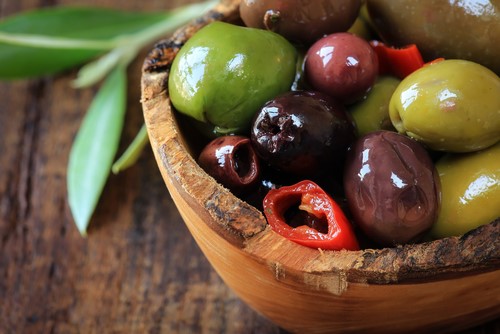 Did you know that there are at least 600 varieties of olives in the world? That seems like a huge number when most people we’ve met are only aware of two, green and black… straight from a can… Oy!

Olives are too bitter to be eaten right off the tree and must be cured to reduce their intrinsic bitterness.

Many times people assume that an olive’s color separates it from another species. However, that is not altogether correct. Throughout the stages of the olive fruits growth it changes colors. Olives can be picked at various stages of their maturing process, with each stage producing a different flavor/color combination. For example… at the beginning of a harvest, when the olives are green, these fruits will taste differently from olives picked from that same tree later in the season—by this time they have turned red or purple. The riper the fruit, the darker it becomes in color.

While the flavor of a green olive is nutty and the fruit is firm, the blacker olives have a more shriveled appearance, with a rich, acquired taste.

Another key aspect that affects flavor is how an olive is produced. All olives must go through a fermentation process—called curing— to be eaten. This process also has an impact on the taste and texture of the fruit. There are five main ways to cure an olive. SeriousEats.com has excellent information on the olive fruit, but we found this information on curing to be particularly informative.

Hydroxytyrosol, an olive phytonutrient that has long been linked to cancer prevention, is now regarded as having the potential to help us prevent bone loss as well.

Did you know that those infamous black olives we were speaking about earlier are actually picked green? They are then pumped with oxygen in order to turn them black—giving them the appearance of ripened fruit.

This is just another reason why we believe it is important to know where our food comes from, and how it is produced. When food is produced using natural processes like fermentation or other age-old methods, the food is still in its most healthy form, making it easier for our bodies to digest, while at the same time enhancing the nutritional value of the product.

If you think this information is interesting, we have only just begun to share about the wonders of the olive tree, and the myriad of products that come from it.

Oh, and if you’re wondering what our FAVORITE olive is? Well, to put it simply… we don’t believe in playing favorites!