Home / Blog / Leave a Legacy / Redemption in the Trees: Choices

In life, God gives us all choices—and free will Still, most of the choices we make each day have no real lasting effect. Deciding if you’re going to have one cup of coffee or two in the morning, if you’re going to go to bed fifteen minutes early, and any other number of spontaneous decisions, are rarely going to be felt years later.

Yet, God numbers the hairs on our heads and He feeds the birds of the air. To God, no decision is unimportant. Thankfully, we’re not God. We don’t have the ability to see how every decision we make will affect our lives. God’s in charge of the details, but we have to listen to His still, small voice. Listening allows us to know what to do when a choice does come along that can alter our course and change us from the inside out.

Sometimes it’s the smallest choice that can change things forever, and if we’re not listening to God we can miss the turning point, passing it off as being an everyday, inconsequential thing.

While everyday choices usually have no drastic or lasting effect, there are times in our lives when we feel every choice reverberating through our bones. Sometimes they are times of joy, where every choice we make has a positive effect. Yet, other times can feel devastating, where every choice we make seems to be wrong and we can’t find our way out of the never-ending cycle of ‘bad’ choices. It is in these times, whether positive or negative, where we must keep our focus on God and listen for His still, small voice. Not every hard time is punishment, and not every joyful time is a reward—we will only know if we listen to Him.

During the Holocaust, for millions upon millions of people, everyday choices mattered. When everything changed: the way they were treated, the way they dressed, the foods they ate, the places they went, their very homes… it must have felt almost impossible to listen to God’s still, small voice. Yennj Baehr’s story gives us a glimpse of this trial, during this hardest season of choice—the Holocaust. 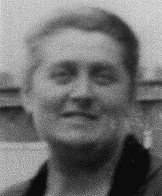 Yennj married Heinrich Baehr, a Jewish dry goods store owner living in Ruchheim—a small town with a minor Jewish population. There, the first floor of their two-story brick home housed their shop, and Yennj happily assisted Heinrich in his work.

Life was pleasant for the Baehrs. They had two children. A son, Kurt, who moved to America after WWI, and a daughter, Ida, who worked in the family store until she married Fritz Lang who, like her father, owned his own dry goods store in a nearby town. Soon thereafter Fritz and Ida Lang had a daughter, Freya.

The Baehrs and their daughter’s family were happy and comfortable, but the Nazi rise to power wouldn’t allow the Jews in Germany to remain so for long…

During the Nazi’s rule, Yennj wrote letters recounting the family’s lives and struggles:

1933-39: “The Nazis have come to power, and many Jews have decided to leave Germany. Our niece, Luise, recently sailed for America. She used to visit us every summer and was like a younger sister to our Ida. Heinrich and I have thought about leaving Germany, but can't do it without taking Ida and our granddaughter, Freya. Anyway, Ida's husband doesn't want to leave his business. And who would sponsor us all to come to America?”

1942: “Heinrich and I, with Ida and her family, have already been deported to two detention camps in southern France. When we arrived at the first one… it was winter—cold and rainy—and we had only straw to sleep on. Six-year-old Freya came down with a high fever and severe earache and almost died. Now, at Rivesaltes, there's a chance to get Freya out of the camp to safety through an aid society (Children's Aid Society) that arranges to hide children with French families in the countryside. We all say goodbye to Freya.”

Not more than a few days after Freya was whisked away to safety, in September of 1942, Yennj, Heinrich, and Ida were sent to Auschwitz, where they perished—Yennj was 55, Heinrich 64, and Ida 33. Freya survived the Holocaust thanks to the Children’s Aid Society and the family who hid her… she was reunited with her father Fritz in 1946—four years after being separated.

Did Yennj or her family actually have any choices? What’s the takeaway?

Yes, the Baehr and Lang families had choices:

Every choice made has a reaction, but during the Holocaust simple decisions such as where you wanted to live, the desire to be near family, etc. all had unfathomable consequences.

Thankfully for most of us, the decisions we make will never lead to the levels of danger and death which people during the Holocaust faced daily. Yet, every action has a reaction, and in this third-day it’s imperative that we are in tune with the voice of God, His wisdom, and the Holy Spirit living within us.

“Wisdom calls aloud outside; she raises her voice in the open squares.” —Proverbs 1:20

“But whoever listens to me will dwell safely, and will be secure, without fear of evil.” —Proverbs 1:33

Today, as with every day of our lives, we are faced with choices—the ability to do good or evil; listening to God if we choose to or not. Let us in this third-day make choices in line with God’s Word. Let us make a choice to listen to Genesis 12:3 and bless the people and nation of Israel, “I will bless those who bless you, and I will curse him who curses you…”