It took 400 plus years to see the growth from Jacob’s family of 70 to a nation of people well over a million. During this time, even though most of those years were under Egyptian oppression, there was always the dream of the return to their promised land.

That dream developed from the promise God gave to Abraham, Isaac, and Jacob, and when the time was right, God raised up Moses to lead His people out of Egypt.

When they reached the threshold of the Promised Land, Moses sent out twelve men to spy throughout the land. They came back with an amazing abundance of produce—not only amazing in quantity, but also amazing in size!

“Then Moses sent them to spy out the land of Canaan, and said to them, ‘Go up this way into the South, and go up to the mountains, and see what the land is like: whether the people who dwell in it are strong or weak, few or many; whether the land they dwell in is good or bad; whether the cities they inhabit are like camps or strongholds; whether the land is rich or poor; and whether there are forests there or not. Be of good courage. And bring some of the fruit of the land.’ Now the time was the season of the first ripe grapes… Now they departed and came back to Moses and Aaron and all the congregation of the children of Israel in the Wilderness of Paran, at Kadesh; they brought back word to them and to all the congregation, and showed them the fruit of the land. Then they told him, and said: ‘We went to the land where you sent us. It truly flows with milk and honey, and this is its fruit.’”—Numbers 13:17-20, 26-27

What did they see? They saw forests, vineyards, fruit trees, and much more.

If they followed God’s instruction, Israel would flourish in the land. But if they disobeyed, as God warned, they would not only suffer, but the land would suffer as well.

The evidence of the spiritual impact of disobedience was a land that became barren. We see this devastation, as we look at the documented effects of the land in recent history.

Mark Twain wrote in 1867— “Mount Tabor stands solitary… [in a] silent plain… a desolation… we never saw a human being on the whole route… hardly a tree or shrub anywhere. Even the olive tree and the cactus, those fast friends of a worthless soil, had almost deserted the country.” (The Innocents Abroad, or The New Pilgrims' Progress, a travel book by American author Mark Twain published in 1869.)

This is a picture of a very desolate land that was empty of people and potential in the 19th century.  However, there were pockets of produce and villages with reasonable populations of Arabs and Jews. These inhabited places tended to exist where water supplies were available to support both the people and the agricultural needs. This land needed the dreamers to return as God provided the way. 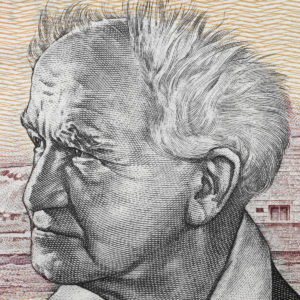 David Ben-Gurion was born and raised in Poland, but dreamed of one day living in the Holy Land. Arriving in the Land of Israel in 1906, Ben-Gurion worked picking oranges in Petah Tikva, and in 1907 he moved to the kibbutzim in Galilee, where he worked as an agricultural laborer.

The following year, he joined an armed group acting as watchmen in the region. These early years in the land were tumultuous, but afforded Ben-Gurion the opportunity of studying law and living in the Jewish community in Thessalonica before moving back to Jerusalem where he was living at the start of the First World War.

Following the outbreak of WWI, he was deported from the land and made his way to New York City in 1915. He met and married Russian-born Paula Munweis in 1917. After World War I and the conquest of Palestine (from the Ottoman Empire) by the British, Ben-Gurion and his family returned to his beloved homeland, never to leave again.

Ben-Gurion saw the struggle to make the Negev Desert bloom as an area where the Jewish people could make a major contribution to all of humanity. He believed that the sparsely populated and barren Negev Desert offered a great opportunity for the Jews to settle in Palestine with minimal obstruction of the Arab population. Because of that, he set a personal example by settling in Kibbutz Sde Boker, located in the center of the Negev.

“Having led the struggle to establish the State of Israel in May 1948, Ben-Gurion became Prime Minister and Defense Minister. As Premier, he oversaw the establishment of the state's institutions. He presided over various national projects aimed at the rapid development of the country and its population: ‘Operation Magic Carpet,’ the airlift of Jews from Arab countries, the construction of the national water carrier, rural development projects and the establishment of new towns and cities. In particular, he called for pioneering settlement in outlying areas, especially in the Negev.

“In late 1953, Ben-Gurion left the government and retired to Kibbutz Sde Boker in the Negev. He returned to political life, after the Knesset elections in 1955, assuming the post of Defense Minister and later the premiership…

Today, efforts to plant orchards and vineyards continue in the land of Israel as water supplies are developed.

In the north of Israel, one sees a great deal of successful agricultural effort. The bounty is fully evident in the abundance of the varieties seen of grain and fruit, of which much is exported.

However, in the southern region, the Negev is still very much a dry and thirsty desert land. This is where Sde Boker is located. It is an oasis in comparison to its surroundings. Yet, it was, and still is, the dream of David Ben-Gurion for this entire desert region to flourish as well.

If Abraham, Isaac, and Jacob lived in or near this desert, there must be sources of water. According to the Geological Survey of Israel, there are aquifers beneath the desert. This means that drilling wells will supply water. With careful and judicious use, this water can be used to plant trees in the desert.

This is why My Olive Tree has been privileged to partner directly with the City of Jerusalem and the Israeli Defense Forces to plant trees in the Negev Desert and to achieve the mission of planting one million olive trees throughout the land of Israel.

The IDF in the Negev supplies the water, and My Olive Tree supplies the trees. When you sponsor an olive tree through the Ben-Gurion Project, you become part of this dream to make the desert blossom as a rose.

This unique partnership will produce employment, income, and revenue for the people of the land and create an environmental blessing to the entire region for years to come.

David Ben-Gurion’s dream of the desert blossoming and the fulfillment of Isaiah 35:1 will come to pass, and we are excited to be a part of this legacy.

“The wilderness and the wasteland shall be glad for them, and the desert shall rejoice and blossom as the rose.”—Isaiah 35:1