The seven species—wheat, barley, grapes, figs, pomegranates, olives and dates (date honey)—symbolically represent the connection of the Jewish people and their land. These are considered as gifts from God to His people, the original produce of the Promised Land.

“For the Lord your God is bringing you into a good land… a land of wheat and barley, of vines and fig trees and pomegranates, a land of olive oil and honey.”—Deuteronomy 8.7-8

At Passover, barley is offered to God as a sheaf of the first fruits of the harvest referred to in Leviticus 23.

“…When you come into the land which I give to you, and reap its harvest, then you shall bring a sheaf of the 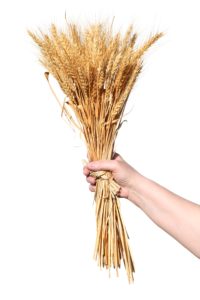 firstfruits of your harvest to the priest. He shall wave the sheaf before the Lord, to be accepted on your behalf; on the day after the Sabbath the priest shall wave it…”—Leviticus 23.10-24
We know this because barley was the only early-season grain crop ripe enough at this time of the year to be harvested, bound into a sheaf, and waved before the Lord as an offering—as the wheat during this time was still seven weeks from being ripened and harvest ready.

On Shavuot (Pentecost) known as the Feast of Weeks or the Feast of Ingathering, the firstfruits of the wheat harvest was brought to the Temple, signaling the culmination of  “the counting down of the omer”(a measurement of dry grain equivalent to a sheaf),” a forty-nine day (seven-week) period of time that began at Passover. This period of the counting down of the omer was, and still is, meant to remind us that the redemption from slavery, the exodus celebrated at Passover, is nothing without the giving of the Torah, the giving of the law celebrated at Shavuot.

“And you shall observe the Feast of Weeks, of the firstfruits of wheat harvest, and the Feast of Ingathering at the year’s end.”—Exodus 34.22

A land of wheat, and barley—the land of Israel along with these significant grain crops were specially promised to the Israelites as a covenant promise of God (see Gen. 12, Deut. 8). Blessed by God, wheat and barley were considered abundant crops with the potential of yielding a hundredfold return.

“Then Isaac sowed in that land, and reaped in the same year a hundredfold; and the Lord blessed him.”—Genesis 26.12

Since ancient times, wheat was considered one of man’s essential crops and was the first known cereal grain to be cultivated. Likewise, barley was also considered as an essential crop and man began cultivating it within the same millennium of the first wheat crops. Both grains represent bread—a staple food of all mankind—the staff of life.

Did you know that today you have a unique opportunity to restore the seven species, including the biblical grains of the bible—the barley and wheat—in a special place called the King’s Valley in Jerusalem? Because My Olive Tree has recently partnered with the Jerusalem Park’s Authority in actively restoring the seven species of Israel according to Deuteronomy 8:7-8—which includes bringing back the two grains in the Kidron Valley between the Temple Mount and the Mount of Olives—we are saying that God’s covenant promises to His people are important, and that they are not forgotten.

This is not just about fulfilling Bible prophecy, but it is about an opportunity to demonstrate God’s love and promise by saying to Jerusalem, “I will not forget you!”

For a limited time—for Only $19.97—you can become a Barley and Wheat Partner in the King’s Valley Seven Species Project. As a coveted My Olive Tree partner you can sow a seed into this initiative and help with the sponsorship of barley and wheat planted within the King’s Valley!

If you would like to find out how you can sponsor this beautiful symbolic gift representing the harvest and God’s provision in the King’s Valley, please visit here.

Choosing the Cup of the Covenant

THE CHOOSING OF A LEGACY