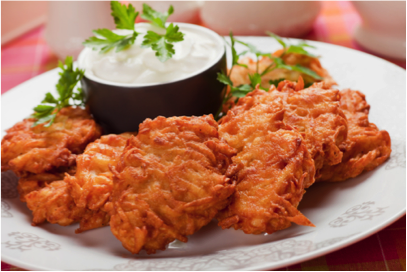 Isn’t it exciting! We can’t help but be giddy as we are preparing for the miracle season of Hanukkah. At My Olive Tree we LOVE to celebrate this “Festival of Lights” with traditional recipes. 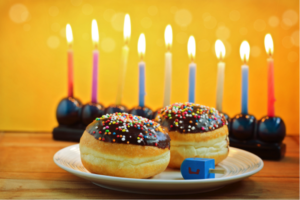 Hanukkah is centered around the miracle story of the Maccabean Jewish rebels who took back their temple from the evil Antiochus IV—who had brought much desecration into this very holy place. Upon his defeat, the Maccabees set out to cleanse the temple and light the menorah, a seven branch candelabra that was to remain lit continuously. To their dismay, there was only one vat of purified oil, enough to last them one day. It would take eight days to produce more oil. However, to their delight, and by a miracle of God, the lamp stayed lit until new oil could be made. This story has been relayed over the centuries, to generation after generation, as a reminder that God will defend His people as they stand against the forces of darkness.

So, given the nature of the story, it makes sense that most of the festivities are centered on finger foods that have been deep-fried in olive oil. Two holiday favorites are the sufganiyah (jelly filled donut), and the latke (potato hash brown). Children, of ALL ages, look forward to making these delectable goodies as they await the arrival of family and friends for the evenings candle lighting ceremony.

So in honor of this special and joyous season, and because we are super health conscious, we are sharing the “lesser of two evils,” the humble potato latke.

Preheat oven to 250°F. Peel potatoes and coarsely grate by hand, transferring to a large bowl of cold water as grated. Soak potatoes 1 to 2 minutes after last batch is added to water, and then drain well in a colander. Spread grated potatoes and onion on a kitchen towel and roll up jelly roll style. Twist towel tightly to wring out as much liquid as possible.

Transfer to paper towels to drain and season with salt. Add more oil to skillet as needed. Keep latkes warm on a wire rack set in a shallow baking pan in oven.

The potato latke is a delicious treat that is wonderful served right from the griddle with applesauce or sour cream.

If you would like to give this recipe a try, our My Olive Tree’s Extra Virgin Olive Oil  from Southern Israel is slightly darker and has a more robust and distinct flavor when compared with our Northern version; while the Northern version truly shines in salad dressings we feel that our Southern version is at its best when used in cooking (sautéing/frying).

Oh… and if you hear that we have been caught trying that jelly filled donut as well… Who can blame us? L'Chaim… to Life!