Home / Blog / Israel's Roots and Her Impact on the World / Why Jerusalem?: The Kings of the King’s Valley (Part 1)

From the early days of Jerusalem, Jewish kings fought for, bought, and built the land up, bringing the barren land to life and making it a land devoted to God—a holy city.

“And the king and his men went to Jerusalem against the Jebusites, the inhabitants of the land, who spoke to David, saying, ‘You shall not come in here; but the blind and the lame will repel you,' thinking, ‘David cannot come in here.' Nevertheless David took the stronghold of Zion (that is, the City of David).”—2 Samuel 5:6-7

Before David became king and conquered Jerusalem, Jerusalem was far from the city we see today. In fact, much of the site of the Temple Mount was once merely a threshing floor, to thresh the wheat and barley harvests of a Jebusite man. Yet, a threshing floor, despite its seeming humbleness, befits what the site was to become.

It is interesting to consider that the site where the Temple was built was purchased as an atonement for sin—a sin where King David had ignored the fact that he was instructed not to take a census of his people, specifically of those men throughout his kingdom who could draw a sword. By taking the census David had placed his trust in HIS own power and might… not in God's. David wanted to prove what HE could do, not what God could.

David had angered God, had disregarded Him, and was given three options of atonement. With David's choice, a plague was to come upon the people, yet God was merciful. God's Word was dispatched to David through the prophet Gad; David was to purchase the threshing floor of a Jebusite man, as a place to build an altar to the Lord (1 Chronicles 21:18-22, 2 Samuel 24:18-20). For 600 gold shekels he bought the land, and for 50 silver shekels he bought the threshing floor and oxen for sacrifice, thus putting his trust in the Lord again and removing the plague (1 Chronicles 21:25, 2 Samuel 24:24). 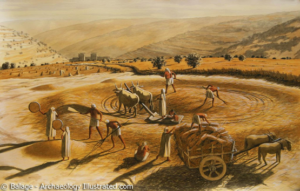 “Now He said to me, ‘It is your son Solomon who shall build My house and My courts; for I have chosen him to be My son, and I will be his Father.”—1 Chronicles 28:6

David thought to build a ‘house' for the Ark of the Covenant that he had recaptured upon the purchased site, yet he had too much blood on his hands, and God instead tasked this endeavor to Solomon, David's son (1 Chronicles 28:2-6). Solomon, upon being anointed king of Israel, slowly began to not only build the Temple, but also began expanding and repairing the walls of Jerusalem and in cities throughout the land of Israel. He also established greater trade relations and treaties with other nations, as well as building a grand palace for himself in Jerusalem, complete with several unequalled gardens and pools of water to water them with, in and around Jerusalem.

“And God gave Solomon wisdom and exceedingly great understanding, and largeness of heart like the sand on the seashore. Thus Solomon’s wisdom excelled the wisdom of all the men of the East and all the wisdom of Egypt. For he was wiser than all men… and his fame was in all the surrounding nations. He spoke three thousand proverbs, and his songs were one thousand and five. Also he spoke of trees, from the cedar tree of Lebanon even to the hyssop that springs out of the wall; he spoke also of animals, of birds, of creeping things, and of fish. And men of all nations, from all the kings of the earth… came to hear the wisdom of Solomon.”—1 Kings 4:29-34

The Lord blessed Solomon with not only personal and political wisdom, but with a peace-filled land. These gifts of God not only allowed Solomon to complete the task laid down by God and his father, David in building the Temple, but to also build a stronger and more beautiful kingdom.

(Image Credit: The BAS Library) Areas in blue show the relative size of the walled city of Jerusalem during the reign of the three kings mentioned. Area size, population, and dates are not definitive, and many sources believe the areas to be slightly larger.

Solomon was a lover of God's gifts of the vine, branch, and earth, building gardens in and around Jerusalem. Solomon's songs and proverbs often speak of plants and wildlife. The importance of this love of God's creation is seen not only in acts such as the Temple's firstfruit offerings, sin offerings, and burnt offerings, but in the very ornaments that adorn the House of God. Pomegranates were carved in ivory, bronze, and gold for priestly articles, and Solomon for the Temple had “made one hundred pomegranates, and put them on the wreaths of chainwork” (2 Chronicles 3:16; see images below). While also in the Temple two cherubim of olivewood would stand side-by-side, and all forms of palm trees and plants would decorate vessels, implements, and pillars. 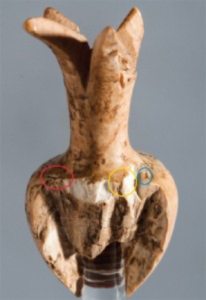 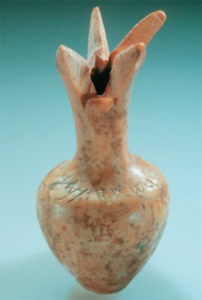 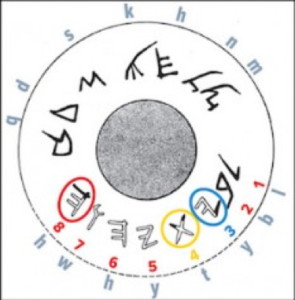 (Photo Credit: Israel Museum, Jerusalem) Ivory pomegranate believed to be the top of a scepter used in The Temple built by King Solomon. The inscription, while legible, does have portions missing, it reads: lby[t yhw]h qdsû khnm which when translated reads “Belonging to the Tem[ple of Yahwe]h, holy to the priests.”

“Honor the Lord with your possessions, and with the firstfruits of all your increase so your barns will be filled with plenty, and your vats will overflow with new wine.”—Proverbs 3:9-10

From the threshing floor to the Temple of God, we see a continual strand of God's blessings and forgiveness. Wheat, barley, pomegranates, olives, and many others of the seven species all play their role in this beautiful relationship between God and man. So much so, that the kings of Judea, used these plants not only in the Holy Places, but also in their currencies, homes, and even their gardens.

“I made my works great, I built myself houses, and planted myself vineyards. I made myself gardens and orchards, and I planted all kinds of fruit trees in them. I made myself water pools from which to water the growing trees of the grove.”—Ecclesiastes 2:4-6

While no physical proof currently exists, many believe that it may have been King Solomon himself who was responsible for the creation of the king's garden (King’s Valley garden) mentioned throughout the Bible. Not only does Solomon speak of his love for gardens throughout his biblical writings, but there is also mention of the garden existing during King Hezekiah's lifetime (2 Kings 25:4, Jeremiah 39:4, Nehemiah 3:15). Additionally, Solomon was known for crafting pools to water gardens and groves, and such an irrigation system would have been required for the King's Valley garden to flourish.

In the King's Valley garden, as in many of Solomon's gardens, would have resided the seven species─wheat, barley, grapes, pomegranates, figs, date palms, and olives─in addition to flowers such as lilies, hennas, and roses, many of which Solomon spoke of in his proverbs and songs…

To continue reading about the Kings of the King's Valley check back for part 2 of this series. In Part 2 you will learn of the time from Solomon's reign to that of the last king of Judah; there we see the importance of Jerusalem, the King's Valley, and the Seven Species so loved by both The King of All and the kings of the earth.