Home / Blog / Blessing Israel / Hanukkah Is Right Around The Corner 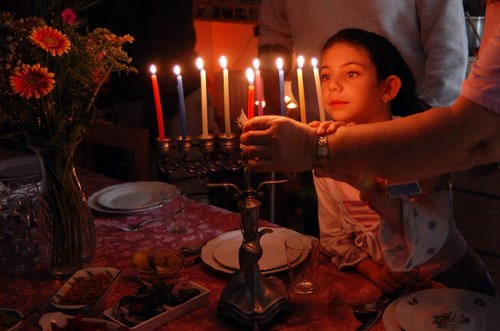 “And many of the people of Israel determined with themselves, that they would not eat unclean things: and they chose rather to die, than to be defiled with unclean meats: 66 And they would not break the holy law of God and they were put to death: 67 And there was very great wrath upon the people.” ― Anonymous Jewish Historians, The Books of the Maccabees: Books 1 & 2

Hanukkah has been celebrated throughout the world for over 2100 years. References marking the celebration of the “Festival of Lights” (Hanukkah) can be found in several important ancient texts. The ancient Jewish historian Josephus writes about the subject nearly 200 years after the initial event, and the Mishnah mentions the lighting of the Hanukkah lamps some 350 years following the revolt. But how did this holiday originally begin?

Hanukkah is celebrated as a commemoration of the Maccabean War that took place around 165 B.C. During this time in Jewish history, Antiochus IV had outlawed the practice of Judaism throughout the nation of Israel.

Subsequently, a rebellion broke out and many Jews who had not adopted the Hellenized lifestyle began to fight back. Against all odds, the Jewish rebels defeated the Syrians (who were under Greek control), which allowed them to restore the ancient temple in Jerusalem that had earlier been sacked and desecrated by the Greek forces.

The temple went through a rigorous cleansing process, and the Menorah (a seven branch candelabra) needed to be relit. However, to their dismay they realized that they only had enough ritually purified olive oil to keep the candles burning for one day. Yet, it would take eight entire days to create enough holy consecrated oil to keep the lamp lit. Still, they chose to the light the Menorah. Miraculously, when they returned the following day the lamp was still lit, and remained so until new oil could be prepared –confirming the faithfulness of their God.

A significant aspect of the Hanukkah traditions is the lighting of the Hanukkiah. The Hanukiah is a nine-branch candelabra. The ninth candle—also called the servant candle—lights each branch over a period of eight days in commemoration of the miracle of oil. This is where Hanukkah gets its other name, the “Festival of Lights.”

Hanukkah is seen as a celebration of the Jews miraculous victory in the Maccabean War, but also as recognition of God’s presence in our lives, even in our darkest hours.

We are praying that you have a wonderful Hanukkah celebration, and that just like the Maccabees, you too will see the faithfulness of God in this season.