Chag Sameach (Happy Holidays!) from all of us at My Olive Tree! We have officially entered the Fall Feast season with Rosh Hashanah celebrations in full swing! 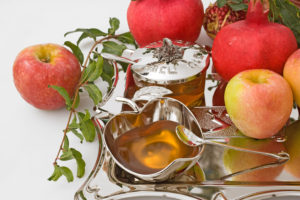 Rosh Hashanah—the head of the year—is the traditional Jewish New Year. It is a special time of introspection and preparation for the Days of Awe (the 10 day period between the Head of the Year and the Day of Atonement—Yom Kippur). Rosh Hashanah was instituted in Leviticus 23 as “the day of sounding the shofar,” and hence is also called the Feast of Trumpets.

The festival Rosh Hashanah is observed for two days beginning on the 1st of Tishrei. According to scholars, this special day is a commemoration of the creation of Adam and Eve—symbolizing the first steps that man and woman took toward fulfilling their purpose on earth. The bond between humanity and God is emphasized during this time, and our dependence upon Him as our provider is illuminated.

“The central observance of Rosh Hashanah is the sounding of the shofar, the ram’s horn, which also represents the trumpet blast of a people’s coronation of their king…

The cry of the shofar is also a call to repentance, for Rosh Hashanah is also the anniversary of man’s first sin and his repentance thereof, and serves as the first of the ‘Ten Days of Repentance’ which culminate in Yom Kippur, the Day of Atonement.

“Another significance of the shofar is to recall the Binding of Isaac which also occurred on Rosh Hashanah, in which a ram took Isaac’s place as an offering to G‑d; we evoke Abraham’s readiness to sacrifice his son, and plead that the me 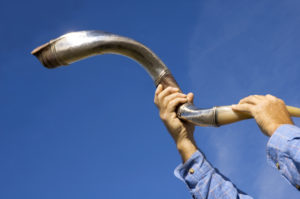 rit of his deed should stand by us as we pray for a year of life, health and prosperity.

“Altogether, we listen to one hundred shofar blasts over the course of the Rosh Hashanah services…

a) Eating a piece of apple dipped in honey, to symbolize our desire for a sweet year, and other special foods symbolic of the new year’s blessings.

b) Blessing one another with the words ‘Leshanah tovah tikateiv veteichateim,’ ‘May you be inscribed and sealed for a good year.’

c) Tashlich, a special prayer said near a body of water (an ocean, river, pond, etc.), in evocation of the verse, ‘And You shall cast their sins into the depths of the sea.’ And as with every major Jewish holiday, after candle lighting and prayers we recite kiddush and make a blessing on the challaha”[i]

As you know, this past year, 5776, celebrated a Jubilee year—the 50th year following seven shmita years (Sabbath or sabbatical years). This Head of the Year (Rosh Hashanah) marks the beginning of a new season! 5777 numerically represents grace (the number 5), and divine perfection (triple sevens—777). What an exciting time to be alive!

As we prepare to move forward into this New Year of 5777, we want to share about a unique opportunity to restore the seven species to Israel’s King’s Valley.

As you may already know, My Olive Tree has been invited by the City of Jerusalem to partner with the Jerusalem Parks Authority to restore the King’s Valley. However, not only have they requested that we provide mature olive trees to restore the park, but that we also begin to restore the original seven species to the area as well.

It is only through generous supporters like you that we have been able to plant over 20,000 olive trees across the nation of Israel. Now, through this incredible honor, we are inviting you to partner with us once again.

We invite you to begin this Head of the Year by sowing a special gift into the nation of Israel! Please click here to learn more!

Rosh Hashanah: A Time of Inheritance