In two books of the New Testament, Mark and Luke, the story of a widow giving two mites is told by Jesus’ disciples in nearly identical wordings, as is Jesus’ comment to His disciples. Yet, what is happening there? What are these two coins that the widow gave away, bringing her to the attention of God incarnate?

“Now Jesus sat opposite the treasury and saw how the people put money into the treasury. And many who were rich put in much. Then one poor widow came and threw in two mites, which make a quadrans. So He called His disciples to Himself and said to them, ‘Assuredly, I say to you that this poor widow has put in more than all those who have given to the treasury; for they all put in out of their abundance, but she out of her poverty put in all that she had, her whole livelihood.’”—Mark 12:41-44

Around the time of Jesus, the coinage of this account were not referred to as ‘mites’ but instead, ‘lepton.’ This name change to ‘mite’ was implemented first when the Word was translated. The King James translations used what was then the ‘modern’ equivalent of this coin, so that parishioners and students of the Word would have a clearer understanding of the ‘insignificant’ monetary value of her gift… and this change to ‘mite’ tended to remain in subsequent translations.

However, this newer title of ‘mite’ instead of ‘lepton’ does not mean that we have no knowledge of the coin in question. In fact, many ‘mites’ have survived to this day, and indeed, few could imagine how small the coin is—the size of the coin surprisingly apropos given its minimal monetary value. On average a ‘mite’ is about the diameter of a wooden pencil and thereby less than 1/3rd the size of a U.S.A. copper penny! Some survive at less than 10mm and few exceed 16mm. 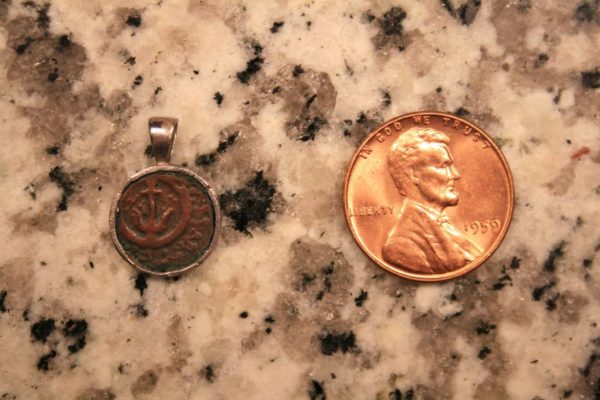 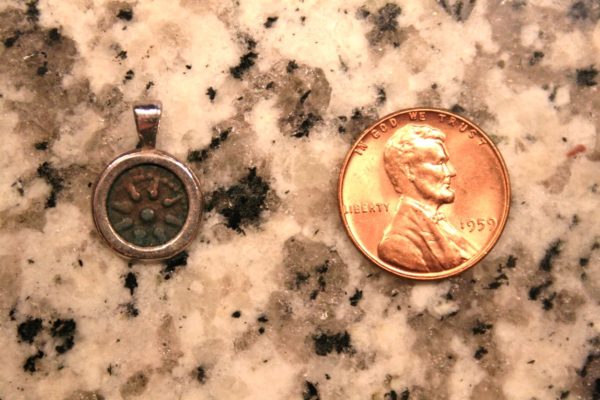 Made of bronze, some believe that if the ‘mite’ is not the lowest denomination ever produced, then it is indeed one of the lowest. Even in 2019 with U.S.A. pennies being more expensive to produce than their monetary worth, the ‘mite’ could not be far behind in its seeming worthlessness.

Because of their extremely low monetary value—in addition to their diminutive size—these lepton were often struck in a haphazard manner and it is exceedingly common for there to be only a partial print on the coins. Additionally, these ‘mites’ used during the time of Jesus were interestingly old. Quite old in fact, ranging from 103 to 76 B.C., some years before Jesus was ever born, let alone witnessing the widow’s generosity. While today it is not uncommon to receive or use coins of some age in the U.S.A. it would be uncommon for us to use coinage no longer being produced. Yet, during the time of Jesus, particularly with a coin not worth manufacturing, it was not so strange. Unless coins bore the name of a current enemy or a symbol that might spark the flames of rebellion, there was no reason to waste materials—or even melt them to craft new ones.

When we discover how old, misshapen, and monetarily worthless the ‘mite’ is, the biblical account told in Mark and Luke takes on a unique tinge. We see that for these coins to be of value to the widow at all means she truly must have had nothing. We see that amazingly, her faith in God remains despite everything that has happened to her; the loss of her husband, her poverty. We see that through it all she somehow finds a way to love God enough to give her all…

“And He looked up and saw the rich putting their gifts into the treasury, and He saw also a certain poor widow putting in two mites. So He said, ‘Truly I say to you that this poor widow has put in more than all; for all these out of their abundance have put in offerings for God, but she out of her poverty put in all the livelihood that she had.’”—Luke 21:1-4

As it says in the Word, there were many who gave much that day, many who did so with grandeur and flourish. Monetarily, her two coins were not needed. Yet, Jesus said that she gave more than all the others.

Well, she gave out of her love. She gave from her heart.

God does not desire from us our money so that we might suffer. He does not even require our funds… after all, He created EVERYTHING. Yet, what He does want… what is the desire of His heart…

Is our love. Our heart.

The widow’s heart was God’s.

Thus, it is less the giving of monies for fulfilling a monetary need and more for a cleansing of our hearts. With every time we practice giving, we become less enamored, less sucked-in by the thrill of what money can bring. We become more aware that it is God and not money that will keep us… that God is our security and safety.

The giving helps prepare our hearts for God’s love. It removes our soul ties…

Putting the Widow’s Story into Practice:

As we discussed before, giving is a way to cleanse our hearts. Of soul ties. Of false security, false safety. Giving is a way to allow our hearts to be God’s… a place that is, in its own right, a blessing beyond measure. Yet, beyond this, giving has many rewards. As it says in Luke 6:38, “…with the same measure that you use, it will be measured back to you.”

Because we receive this measure of what we give, it is wisdom to give that which is of God, and not man or evil. When we give we must—like the widow—give from the heart. For to give without love is to hardly give. Thus, while God will not bless us with evil for our giving—even if our hearts are not doing so out of love but obligation—how much more will we be blessed when we give out of the fullness of our hearts.

At My Olive Tree we seek to grow our hearts, just as the widow Jesus observed did…

From planting olive trees on army bases to provide extra income for lone-soldiers; to planting trees on a family farm so that they can overcome BDS boycotts; to planting trees in the remembrance of Holocaust victims… we, though people like YOU, are showing God’s love. Learning how to love as He does, giving a measure of the blessings God has bestowed on us…

Knowing that when our brothers and sisters are blessed by our love, we too are blessed; monetarily, and with an outpouring of the Father’s love.

The Purim Holiday: A Day of Rejoicing and Giving