The Importance of Ruth:

The book of Ruth is commonly read over the Jewish holiday of Shavuot, along with the law given to Moses on Mount Sinai.

The reading of the law is fitting; Shavuot is a Harvest Festival and since it celebrates what God has given, why should we not look back and remember what is expected of us?

Yet, what about the book of Ruth? That centers on a woman from Moab believed by many, through oral tradition, to be a high ranking Moabitess! Not only that, she was the granddaughter of Eglon, king of Moab. Eglon in turn being grandson of King Balak, who had regrettable dealings with Moses; the same Moses who brought down the tablets of God’s law! The very law read on Shavuot! Which begs the question… why Ruth?

Why would anyone choose to follow Ruth’s journey over one of the holiest celebrations of the year? 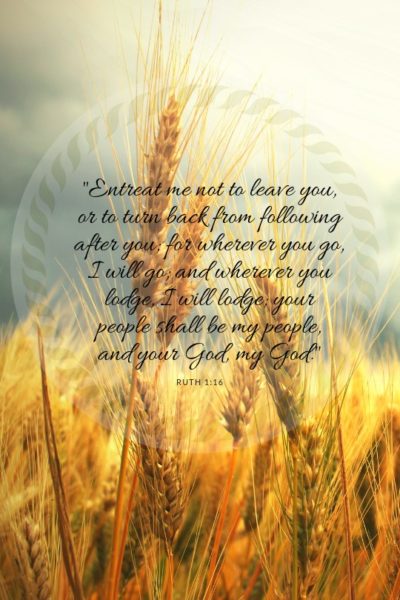 The answer lies in the two primary reasons why Shavuot is celebrated:

First—A more modern-day reason is that the Jews, having not fully embraced the gift of the laws in the past, today put forth a special effort toward being thankful for that gift. Ruth, therefore, being a Gentile who not only came to cherish the laws, but put them into practice so completely—altering every aspect of her life—is a wonderful example of joyfully embracing the laws the Jewish people now so cherish.

“And Boaz answered… ‘It has been fully reported to me, all that you have done for your mother-in-law since the death of your husband, and how you have left your father… mother and the land of your birth, and have come to a people whom you did not know before.’” —Ruth 2:11

“‘…anoint yourself, put on your best garment and go down to the threshing floor…’”  —Ruth 3:3

There is, of course, the harvest theme. Ruth meets Boaz in his field while gleaning barley behind the reapers of the harvest—a preparatory time for her. Then, soon after, during what is believed to be Shavuot—the time of firstfruits—the harvest festival arrives, as does Ruth’s destiny.

Ruth, under the guidance of her mother-in-law, goes to Boaz at his threshing floor during Shavuot with the expectation of his redeeming her according to the law. Ruth went expecting and was rewarded.

Thus, because of all of these harvest-timed events, Ruth being redeemed during Shavuot, and eventually becoming the grandmother of King David, the great-grandmother of Solomon—even in the lineage of Jesus—all make Ruth important for Shavuot.

Still, while Ruth’s story is important during Shavuot, the journey she took is filled with many lessons with daily application. Ruth’s story is worth exploring in greater detail…

Ruth’s story began after she was widowed, when her security and hope were well tested, and while the Word includes many widows with many trials, Ruth’s story is unique…

Having buried her husband, Mahlon, Ruth follows her mother-in-law, Naomi, despite Naomi’s repeated attempts to have her turn back; to return to her family.

With this initial meeting of Ruth, with the first words she speaks, we learn of her determination, her love of Naomi, and of course, her love of God. 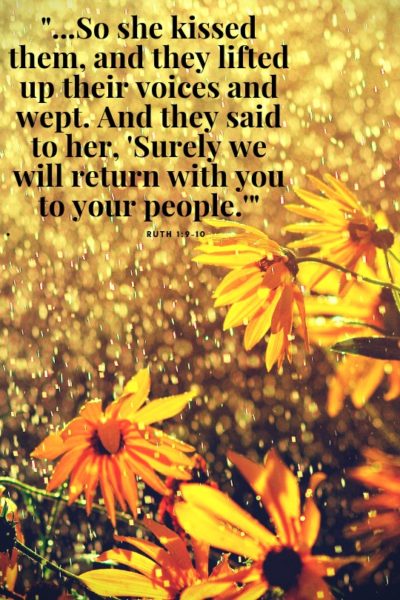 While this, in and of itself, is a lesson to us to love and follow after God, her story progresses further…

No longer wishing to serve the false god she once did, and wanting to care for Naomi, Ruth followed her on what in the natural was likely only a one to two-week journey—yet, in her heart would have been much longer, knowing full well she may never return.

This one decision to let love guide her actions meant she never saw her parents again… but her hope was not diminished. Her heart knew the glory of following God and of doing right by her mother-in-law who had lost her husband and sons—all her family in Moab. As far as we know, she never regretted her decision. She never second guessed it. 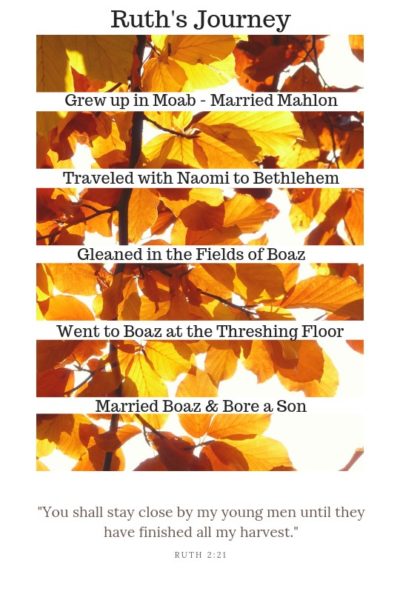 The fact that Ruth does not complain or second guess her decision, even upon arriving in Bethlehem where she—a woman from Moab—likely faced many hardships besides Naomi’s poverty, is beyond what our flesh-filled logic might deem wise. Even Naomi’s own bitterness was not enough to dampen Ruth’s spirits.

Ruth took everything in stride. She did not try to get Naomi to work, or to call upon her old friends and relatives for food. Instead, she eagerly went out into the fields to glean. She supported Naomi without ridicule or pride, working for the majority of the day in the hot sun.

It was Ruth’s lack of condemnation and heart of love that first caught the attention of Boaz. Ruth did not shout out what she was doing for her mother-in-law, yet the tale of her kindness still reached Boaz. Her heart commanded attention. 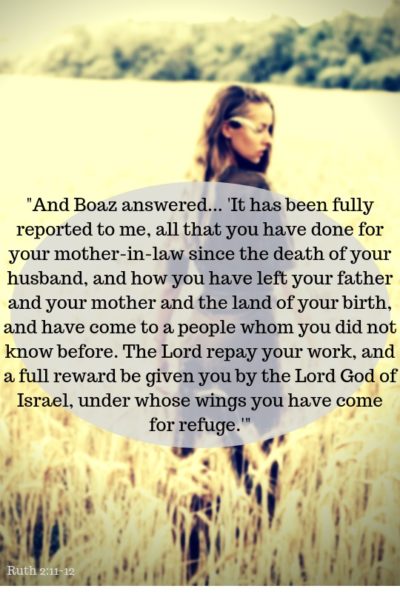 Thus Ruth found favor in the eyes of Boaz, and he ordered his men to leave extra for her as they gathered and to give her water. Boaz saw to it that she was fed and well while in his fields, and that no one chastised her.

Yet, further still, as the harvests neared their ends, when Naomi told Ruth to go to the threshing floor at the end of Shavuot, Ruth found favor again. For Ruth listened to her mother-in-law and went to Boaz on the threshing floor after he had ate and drank his fill, lying at his feet as he slept. Thus, when he awoke and asked who was there, Ruth replied that it was his maidservant, Ruth. Moreover, she asked him to take her under his wing—she asked him to redeem her!

Yes, her mother-in-law Naomi had told her to go lay at Boaz’s feet, and Ruth would have likely understood what that implied… yet, Ruth used the language of the Israelites. Ruth spoke so that Boaz might understand; choosing to honor Naomi by doing her will rather than trying to seek a younger or wealthier husband. Because of Ruth’s obedience, she found favor in the sight of Boaz. Then, even though he informed Ruth that there was another relative closer to her who was required to have first choice, Boaz still knew how it would end. He knew what his relative would say and did not shy away from the task—not only because of Ruth’s relationship to Naomi, but because Ruth was a woman of character.

Therefore, even when Boaz approached the nearest relation, he did not try to make Ruth sound more enticing. He did not try to sway him to take her, gladly doing so himself. Thus, Boaz redeemed Ruth, and she became his wife. Together they had a son named Obed, who would be the grandfather of King David, and the 29th generation for Jesus. Completing a story that in the natural would have felt a fairy tale if told beforehand, yet was a Godly design of faith, hope, and love.

What Can We Learn From Ruth?

Ruth was a woman of good character. Boaz, even when she asked him to take her under his wing, commented on how she was a virtuous woman. Not only that, Boaz went further still, stating that all the people of his town knew it!

Therefore, firstly, we can learn that to be of good character, to be virtuous, is to do unto others as we would have them do unto us. To act out of love.

Secondly, we can learn that we reap what we sow. Ruth sowed love and kindness, therefore, she received that in turn. Yes, it was because she was virtuous, but you have to sow to reap.

So, how can we put into practice the lessons of Ruth? In our day to day lives, we can turn to God for patience, love, and kindness… small, everyday lessons of the character God would have us embody. Yet, what of today? What can we do now?

At My Olive Tree, through people like YOU, we are planting the land of Israel with trees and crop yielding plants. By doing this we are not only bringing the land of Israel to life, but we are showing the father’s love to those who need it most. Giving jobs, hope, and love… in essence acting as a Boaz to the people of Israel, not merely giving them food, but the tools and pride to gather their own.

Let us in this hour show the good character of Ruth, planting seeds of love so that we too can reap a harvest… so that we might one day hear, well done my good and faithful servant.

Seed for the Harvest

Speak Life to the Harvest

What Does the Parable of the Fig Tree Have to Do with Israel?