You are here: Home / Blog / Blessing Israel / Walking Through the Word: The Path of Elijah (Part 2)

In Part One of this two-part series, we journeyed with Elijah from his hometown of Tishbe to his standing on the mountain, listening to the still small voice of God. We also explored some of the miracles Elijah performed in addition to his prophetic words and interactions with God, and how, through these, God moved with power, authority, and love.

In this final part, we will continue on the final portion of Elijah’s path from the Wilderness of Damascus and meeting Elisha, to Elijah’s ascending to Heaven, as well as what we, as believers, can take away from Elijah’s life and relationship with God!

Wilderness of Damascus and Elisha: 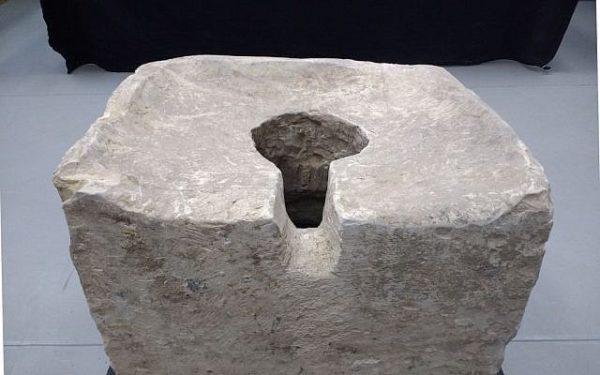 (Source: Ilan Ben Zion/Times of Israel Staff. 8th century symbolic toilet placed into a pagan shrine by a King of Judah—possibly Hezekiah. Evidence of placing toilets in the shrines/temples of false gods is found in the Bible, one example is in 2 Kings 10:27 when King Jehu’s men, “…broke down the sacred pillar of Baal, and tore down the temple of Baal and made it a refuse dump to this day.”)

Upon completing this God-given task, God led Elijah from the Wilderness of Damascus to Elisha—who was plowing his father’s fields, unaware that this would be the day his course would change forever.

“…Then Elijah passed by him and threw his mantle on him. And he [Elisha] left the oxen and ran after Elijah, and said, ‘Please let me kiss my father and my mother, and then I will follow you.’

“So Elisha turned back from him, and took a yoke of oxen and slaughtered them and boiled their flesh… and gave it to the people, and they ate. Then he arose and followed Elijah, and became his servant.”—1 Kings 19:19-21

Vineyard of Naboth in Samaria: 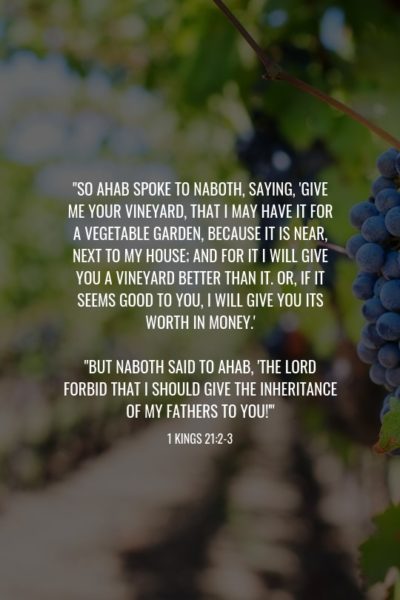 Eventually, God told Elijah of a wrong that King Ahab had committed. For Ahab had not only coveted a vineyard that belonged to a man named Naboth, but had allowed his wife, Jezebel, to do what she would to get it… ordering the priests of the area to bring false witnesses against Naboth and have him stoned. Ahab not only failed to rebuke her actions, but hastened to take possession of the vineyard upon Naboth’s death.

So God told Elijah to go to Naboth’s vineyard where Ahab was inspecting his new land, and prophesy the Word of the Lord to Ahab—what this evil deed would bring upon Ahab’s house…

“‘…because you have sold yourself to do evil in the sight of the Lord: “Behold, I will bring calamity on you. I… will cut off from Ahab every male in Israel, both bond and free…”’ And concerning Jezebel… ‘The dogs shall eat Jezebel by the wall of Jezreel.’

“So it was, when Ahab heard those words, that he tore his clothes and put sackcloth on his body, and fasted and lay in sackcloth, and went about mourning.

So, as the Lord had spoken, Ahab died and the dogs licked his blood and Ahab’s son, Ahaziah, ruled in his place. Ahaziah also did evil in the sight of the Lord and therefore, when God sent Elijah to intercept King Ahaziah’s messengers on their way to inquire of the false prophets of Baal as to Ahaziah’s fate—if he would live or die from the injuries of his fall—Elijah gave a bad report.

As the messengers made their way to the prophets of Baal, Elijah met them as the Lord had instructed. Elijah prophesied the Word of the Lord that King Ahaziah would not live, and listening to his words they returned to the king without going further—reporting to him…

“…A man came up… and said… ‘Go, return to the king who sent you, and say to him, “Thus says the Lord: ‘Is it because there is no God in Israel that you are sending to inquire of Baal-Zebub, the god of Ekron? Therefore you shall not come down from the bed to which you have gone up, but you shall surely die.’”’”—2 Kings 1:6

Yet, King Ahaziah, like his father, Ahab, did not treat the prophets of the Lord with respect, sending armed captains with fifty men each to bring Elijah by force!

With each captain and company, God listened to Elijah’s requests, swallowing the first two companies in fire… only sparing the third when the captain humbled himself before Elijah…

Then Elijah went to Ahaziah as God ordained, and Elijah repeated his prophecy to the king. Soon, Ahaziah died, leaving no heir to the throne. Because of this, Ahaziah’s brother, Jehoram, another son of Ahab, became king.

From Gilgal, to Bethel, to Jericho, to the Jordan:

When Elijah knew it was time for his ascension to heaven, he tried to leave behind his companions and servants. Yet Elisha, of all his companions, would not leave him—for he knew the Lord was about to take his master.

First, Elijah asked Elisha to stay in Gilgal, for he was to go on to Bethel.

Then, Elijah asked Elisha to stay in Bethel, for he was to go to Jericho.

Finally, Elijah asked Elisha to stay in Jericho, for he was to go to the Jordan River.

“Then Elijah said to him, ‘Stay here, please, for the Lord has sent me on to the Jordan.’

“But he said, ‘As the Lord lives, and as your soul lives, I will not leave you!’ So the two of them went on. And… the two of them stood by the Jordan. Now Elijah took his mantle, rolled it up, and struck the water; and it was divided this way and that, so that the two of them crossed over on dry ground.”—2 Kings 2:6-8

There, as they went to cross the Jordan, what was likely an everyday miracle—for Elijah—occurred. Elijah, taking his mantle—tallit—struck the water of the Jordan so that both he and Elisha could cross over on dry ground… a miracle soon to be repeated by Elisha, yet, the last Elijah would perform…

“And so it was, when they had crossed over, that Elijah said to Elisha, ‘Ask! What may I do for you, before I am taken away from you?’

“Elisha said, ‘Please let a double portion of your spirit be upon me.’

“So he said, ‘You have asked a hard thing. Nevertheless, if you see me when I am taken from you, it shall be so for you; but if not, it shall not be so.’  Then it happened, as they continued on and talked, that suddenly a chariot of fire appeared with horses of fire, and separated the two of them; and Elijah went up by a whirlwind into heaven.”—2 Kings 2:9-11 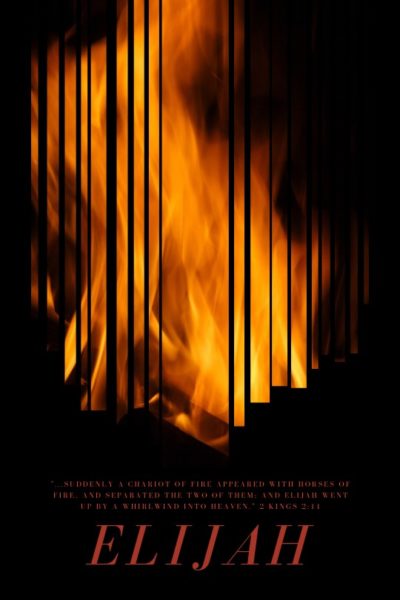 What can we learn from Elijah’s life?

First, that God is patient. Even when Elijah doubted or questioned, God listened, and even gave him rest.

Second, that to follow God’s ways is not always easy, but that God always provides a way for us and gives us the tools we need to answer our call.

Thirdly, that our call, like following God, is not always easy. As Elijah said to Elisha when Elisha asked for a double portion of his master’s call, ‘you ask a hard thing.’ It is not easy, but our souls and the Holy Spirit inside of us, will never be satisfied unless we answer our call. If we are willing to pick up our mantle, God will give us the strength to follow, even when it is not easy.

Finally, that the journey is long, but every step brings us closer to the glory of God, to the fulfilling of our Books in Heaven. Every action we take that is of the Lord brings Him such joy, and makes our path—the journey—less wearying and meandering.

“For I know the thoughts that I think toward you, says the Lord, thoughts of peace and not of evil, to give you a future and a hope.”—Jeremiah 29:11

At My Olive Tree we are, through people like YOU, answering our call and walking out the journey God has placed upon us. Like Elijah, it is not easy, but it is a blessing. To be able to give jobs, beauty, love, and hope to the people of Israel. To restore the land Elijah traversed and Jesus after him. It is all a blessing and YOU TOO can become a part of that blessing! Additionally, by being a blessing, you too will be blessed. Not only the blessings that will come—as the Word says—if we bless Israel, but also the blessing of gifts… be they anointing oil, prayer shawls/tallits, or reminders of God’s love and promises!

Together we can bring the light and fire of God to the people of Israel as we rekindle the fires burning within us! Let us journey together… answering the call of God as we follow wholly after Him!