You are here: Home / Blog / Blessing Israel / Walking Through the Word: The Path of Elijah (Part 1)

Elijah, an Old Testament prophet born in Tishbe, prophesied to multiple kings of Israel, and, on one occasion, a king of Judah. During the reigns of these kings, Elijah traveled throughout Samaria and beyond… into the land of Damascus, to the cities of Jericho, Jezreel, Bethel, and even into the wilderness.

Often traveling with companions, Elijah worked faithfully as a voice of God, even when he doubted or allowed fear to grip him for a time. Elijah always returned to the voice of the Lord and the Lord’s patience with him was great, as was His care and love for Elijah.

While Elijah primarily worked as a prophet of the Lord, God also performed many miracles through Elijah—as he would with Elisha to follow—and showed His mighty hand through word or action everywhere Elijah traversed.

While the Word does not detail anything of Elijah’s life before his first prophetic word to King Ahab, it is said that Elijah is from Tishbe, and so, that is where our journey begins.

Yet, the first act of Elijah is to prophesy to Ahab of a drought. While we do not know definitively where this prophecy took place—though it was likely in Samaria—it succeeded in angering Ahab, causing Elijah to have to flee to Brook Cherith at the Lord’s command. There, the Lord provided for Elijah, not only by sending him to a place of safety and life with clean water to drink, but He cared for him by using the birds of the air, sending him everything Brook Cherith did not provide.

“Then the word of the Lord came to him, saying, ‘Get away from here and turn eastward, and hide by the Brook Cherith, which flows into the Jordan. And it will be that you shall drink from the brook, and I have commanded the ravens to feed you there.’”—1 Kings 17:2-4

From there God sent Elijah to Zarephath, which belongs to Sidon, where Elijah performed his first recorded miracles. 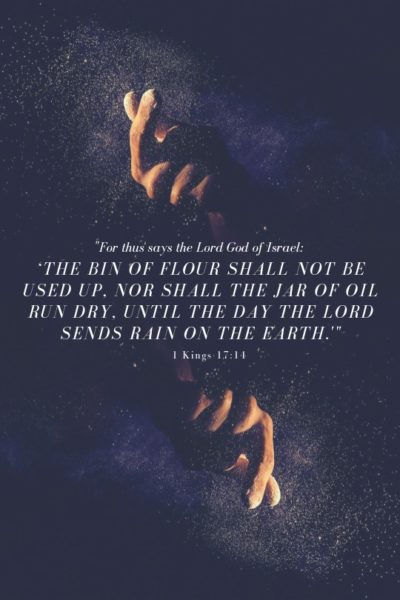 First, the miracle of the flour and oil, where neither dried up when the widow had faith enough to bless Elijah:

“So she said, ‘As the Lord your God lives, I do not have bread, only a handful of flour in a bin, and a little oil in a jar; and see, I… prepare it for myself and my son, that we may eat it, and die.’

“And Elijah said… ‘Do not fear; go and do as you have said, but make me a small cake from it first… afterward make some for yourself and your son. For thus says the Lord God of Israel: “The bin of flour shall not be used up, nor shall the jar of oil run dry, until the day the Lord sends rain…”’”

Then the second miracle where Elijah cried out to God to raise the widow’s son from the dead and God answered:

“…So he took him… and carried him to the upper room where he was staying, and laid him on his own bed… And he stretched himself out on the child three times, and cried out to the Lord and said, ‘O Lord my God, I pray, let this child’s soul come back to him.’ Then the Lord heard… and the soul of the child came back to him, and he revived.”—1 Kings 17:19 & 21-22

From there God sent Elijah to meet with King Ahab in the wilderness, preparing a meeting between himself and the Baal prophets, so that the king and all the people of Israel might see the strength of the Lord.

So Ahab agreed and Elijah went to Mount Carmel to meet with all of King Ahab’s Baal prophets, showing them the falsehood of their gods and the majesty and power of the One True God.

Elijah, standing there upon Mount Carmel for many hours waiting for the Baal prophets’ false god to produce fire mocked, “…‘Cry aloud, for he is a god; either he is meditating, or he is busy, or he is on a journey, or perhaps he is sleeping and must be awakened.’ So they cried aloud, and cut themselves, as was their custom, with knives and lances, until the blood gushed out on them. And when midday was past, they prophesied until the time of the offering of the evening sacrifice. But there was no voice; no one answered, no one paid attention.”—1 Kings 18:27-29

Elijah allowed them to continue until evening when he left the false prophets and prepared his sacrifice, calling the people of Israel to come to so that they might see the power of God and their hearts return to Him. And Elijah called upon the Lord and the Lord consumed the sacrifice with fire from Heaven showing the people that God is real.

“Then the fire of the Lord fell and consumed the burnt sacrifice, and the wood and the stones and the dust, and it licked up the water that was in the trench. Now when all the people saw it, they fell on their faces; and they said, ‘The Lord, He is God! The Lord, He is God!’”—1 Kings 18:38-39

Then the people of Israel seized the prophets of Baal, and Elijah took them to Brook Kishon to destroy them so that the people might return to God. 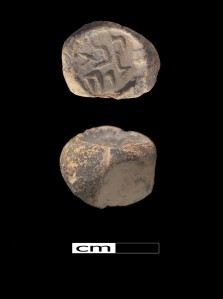 (Found near Jerusalem’s Western Wall this seal reads, ‘Pure of G-D’ and would have been used in the Temple to mark those things considered holy or acceptable to God. The hardened clay impressions this created were possibly used for offerings to signify that an individual’s purchased animal, such as a bull—or other items—to give to God was preapproved as pure—without defect—and ready for sacrifice.)

Return to Mount Carmel; The Race to Jezreel:

Upon destroying the prophets of Baal, Elijah was directed to Mount Carmel again by God.

Elijah tells his servant to go look toward the sea, over and over again to see if he saw a cloud—a sign that the drought the Lord allowed was to end. Each time the servant came back with a negative report, until at the seventh time—seven in the Word often meaning perfection—his servant saw what Elijah knew was to come…

“Then it came to pass the seventh time, that he said, ‘There is a cloud, as small as a man’s hand, rising out of the sea!’ So he [Elijah] said, ‘Go up, say to Ahab, “Prepare your chariot, and go down before the rain stops you.”’

“Now it happened in the meantime that the sky became black with clouds and wind, and there was a heavy rain. So Ahab rode away and went to Jezreel. Then the hand of the Lord came upon Elijah; and he girded up his loins and ran ahead of Ahab to the entrance of Jezreel.”—1 Kings 18:44-46

Having left Mount Carmel Elijah raced Ahab to Jezreel. In the natural, Elijah had no chance of reaching Jezreel before Ahab, for Ahab was using horses, Elijah simply running. Yet, Elijah ran with the hand of God, shifting the tide and reaffirming the power of God beyond even the acts that took place on the mountain top.

Yet, upon arriving in Jezreel, Elijah was felt forced once again to escape, this time from King Ahab’s wife, Jezebel, who swore to kill Elijah in retribution for the deaths of Ahab’s false prophets.

“Then Jezebel sent a messenger to Elijah, saying, ‘So let the gods do to me, and more also, if I do not make your life as the life of one of them by tomorrow about this time.’”—1 Kings 19:2

Yet, God went with him, though He had not told Elijah to run…

Beersheba, the Wilderness, and Horeb… The Mountain of God:

Fleeing to Beersheba long enough to leave his servant, Elijah continued on into the wilderness, collapsing under a broom tree and asking God to end his life, as he foolishly believed he was the only prophet of the Lord left, and even the only follower of God!

Despite Elijah’s misplaced doubts, God did not depart from him. Twice God sent an angel to refresh Elijah with cakes, water, and sleep, preparing him to follow Him once more for forty days and nights to Horeb, the Mountain of God!

“And the angel of the Lord came back the second time, and touched him, and said, ‘Arise and eat, because the journey is too great for you.’ So he arose, and ate and drank; and he went in the strength of that food forty days and forty nights as far as Horeb, the mountain of God.”—1 Kings 19:7-8

Reaching Horeb, Elijah spent a night in a cave and heard the voice of the Lord ask, ‘what are you doing here,’ and Elijah again claims to God that he is the only one left of His prophets.

Then Elijah, in a dream, vision or reality, stood upon the mountain as the Lord instructed and waited. 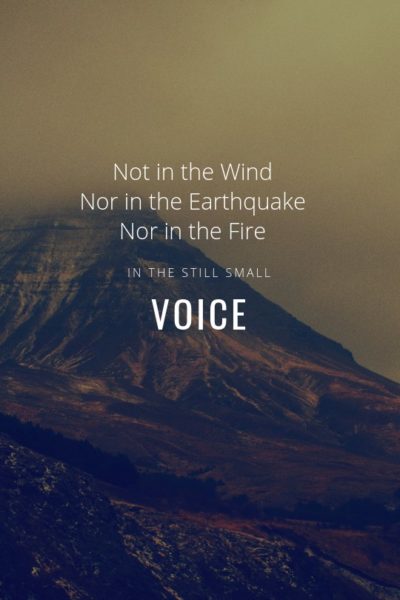 It is there that God again asks Elijah, ‘what are you doing here,’ Elijah yet again replies that he alone is left… but God, ever patient and gentle, responds in the still small voice that seven thousand are left—that he is not alone. Then God, having refreshed and given hope to Elijah, sends him to the Wilderness of Damascus to do His work.

In Part Two of this two-part series we will continue to follow Elijah’s journey through the Holy Land and beyond. From the Wilderness of Damascus where Elijah met Elisha, to Elijah’s ascension into Heaven, we will explore the prophetic words, miracles, and path of Elijah and what we, as believers, can take away.